Scream 5 Review: Can it match the original? 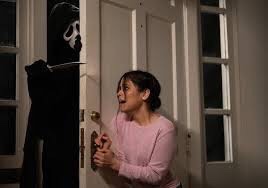 The gore, the horror, the plot twist, the thrilling chilling feeling while watching the movie, everything about Scream 5 is bound to have you wrapped in and wanting more.

The movie is about a movie called Stab. It’s just like Scream. In the movie, instead of the characters talking about Scream, they say Stab. The fans who were really into Stab didn’t like the newer one. They thought it was a horrible remake. They wanted to recreate what they thought the new Stab movie should have looked like. They used one of the main character’s, Sam, as a way to bring their whole story together. Sam is the daughter of Billy Loomis, the killer in the previous movie. As Sam fights her dad’s voice in her head, while also trying to protect her sister; life couldn’t get any worse, or at least that’s what she thought. The movie is full of surprises and twists.

I personally would rate the movie a 7.5/10. I liked the plot because it was suspenseful. I never knew what was coming next. My heart stopped every time the dramatic suicidal came on. There were also some comedic moments that I liked. The jokes that were mad. Even though they were somewhat corny, they were funny.

“I would rate this movie 6/10,” Lacey Stanford, a sophomore at Bishop Noll. “If you are a horror fan I do recommend this. It’s really not that bad of a movie, I just feel like it could have been better.”

I feel like this is a good movie to watch if you want to laugh while also having a few jump scares. If you are a real and serious horror fan I wouldn’t recommend this movie.

“If it was around Halloween, I would rewatch it, but as a person that would watch a horror movie whenever because; yes, horror; no”, said Stanford.

Scream 5 doesn’t really match the plot of the other ones, even though it has some of the same similarities. It has common characters and also the same order of the plot. In the movie, Dewey explained the ways to find the killer. These were the same ways they figured out the killer in the original movie.

He gave them advice on what clues to watch out for. And who to trust. The most important part of everything he said was for them to never trust their love interest, they always end up being the killer. This is what came up later in the plot twist.

“I haven’t watched all the movies, but I know what happens in the first movie and I mean it’s better than just a classic story line of killing,” Stanford said.

I also haven’t watched all of the Scream movies, but since my mom watched them she kind of helped me know what to expect. She told me it would be more funny and scary. She also told me which characters were from the original.

“My favorite part of the movie would be Tara fighting back against the ghost face,” said Stanford, “it shows how she has changed a little from back then when she wouldn’t fight back and would just run and end up almost dead.”

My favorite part was probably when Sam was fighting against her boyfriend, who turned out to be in on the whole killing spree. It was shocking. My brother and I were on the edge of our seats at the movie theater.

“Wes was my favorite character, I feel so bad how he couldn’t even do anything. He died so fast in the movie he should have gotten more of a chance,” said Stanford.

Mindy was the best character in the movie to me. She was funny and had this attitude about her that I could relate to and kind of connect with.

Even though the movie was more funny than scary, I liked it. If you like scary movies with gore and a little bit of laughs, Scream 5 would be perfect for you.

You could watch it in theaters. It is not on popular streaming services such as Netflix, Hulu, or Amazon Prime; but you might be able to find it on other ones. You could also watch it on secure websites like Soap2Day, for free.