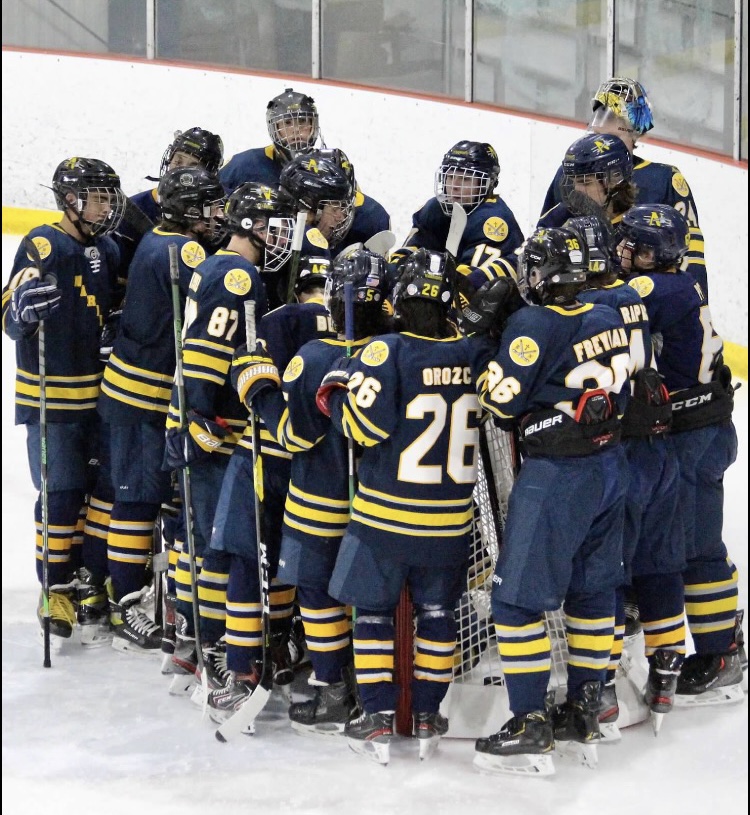 After a loss in the State championship game during last year’s COVID season. The Bishop Noll hockey team is very hopeful to win another state title this season.

Assistant Coach Kevin Smith is looking forward to this season. With only two players that graduated, the hockey team has added a few more players. Smith is hopeful that the hockey team will win a state title and the Roper Cup this year. “I think that the absolute expectation is that we should be competing for the state championship this year,” he said. “It’s always the expectation every year for every sports team but it’s not always reality. This year I think that it’s a very strong reality, we’re already being looked at as going to be one of the top ten teams in the state this year.”

Smith believes that the sophomore hockey players will shine this year. With many practices he sees a lot of potential in the young players. Smith said, “I really think all of our sophomore players will shine this year, we have Logan Stumpf, Ethan Rapacz, Julian Orozco, Erik Shelton, Kyle Cipowski, and Alex Herrera. All of them made a huge impact last year and during this first game,” he said. “I’ll be looking forward to these sophomores showing their true potential.”

Smith believes that the hockey team has a very strong bond and that they are like family.

“We truly are like a family. Last year with COVID we had lunch together, so that kind of helped bring us all together,” he said. “The locker room environment has a family atmosphere. We do community service in order for us to get closer and to just become better players and better people overall. We always have team bonding exercises which includes going to do top golf and axe throwing.” Smith believes that with hard work and good mentality will win the team another State title.

“Hard work takes to win another state title, but we also have to have the next man up mentality, that’s something that we talk about during our team meetings,” he said. Monday night, our first game of the season we were missing two of our top three players and everyone just stepped up and no one complained, they just did what they had to do to take care of business and we won against a very strong St. Rita team. With having that next man up mentality and just being able to play when you’re called upon, just make sure that you’re doing your best.”

Sophomore Julian Orozco,  is looking forward to this season as a second-year varsity player.

“I’m most looking forward to going out on the ice and playing with everyone else and seeing everyone almost everyday,” he said.

“So far injuries have stood in the way of hopes, we’ve lost a couple of our top players but we’re still winning,” Orozco said. “We can overcome these challenges by starting to step up.” The bond that the players share is like family, they are all close and are almost like brothers in a sense.

“We all kind of knew each other before we came here, we all hang out during school. We work out three out of the seven days a week so we can see each other almost everyday and I think that makes us closer,” Orozco said.

Fans can expect a good game if they decide to go to a Bishop Noll hockey game. “You can expect a great game, we’re going to work hard no matter what,” he said. We want to win and I think it shows how hard we work at the games and to take no team lightly, even if it’s Munster or Culver Academy.”

Sophomore Logan Stumpf, is looking forward to possibilities of winning state this season.

Dedication will play a big role in this year’s hockey team to win a state title. He said, “We have to keep working hard and keep pushing ourselves in order to earn a State title.”

Sophomore Erik Shelton, is looking forward to being with his friends and to play hockey this season.

He hopes to win a State title this year. He said, “I’m hoping that we can win state and win more games than we lose, I’m also hoping that we can be the best team in Indiana.” Right now unmotivation stands in the way of his hopes. He said, “I would say not trying as hard as we could stands in the way because we’re a really good team and we could think that we’re better than everyone else. That could come in the way of that. If we have the mentality that we aren’t the best and work hard, we could beat every team,”