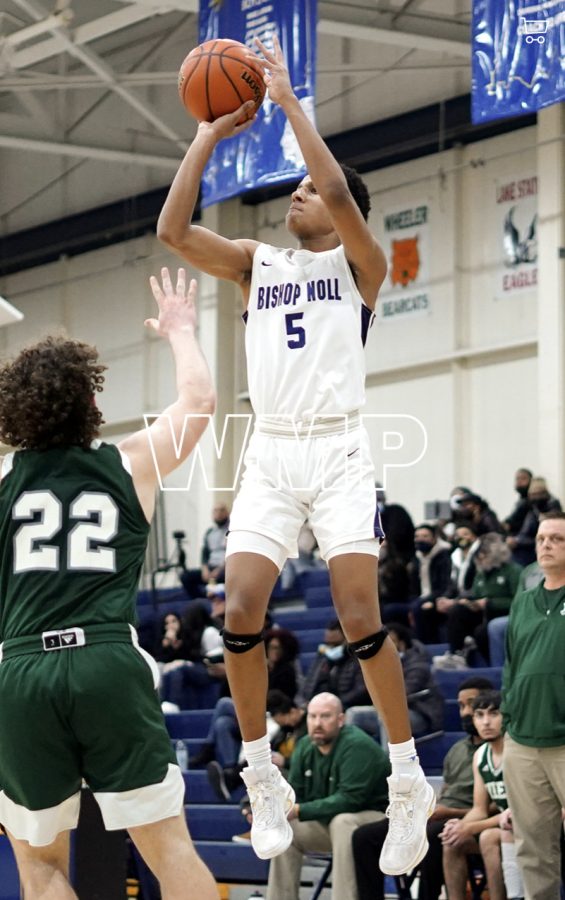 Sophomore Angel Alvarez, shooting guard for the boys basketball team, has been named player of the game for two times this season. He has helped his team win and splash some points onto the board. He swished 13 points in the Feb. 9 71-66 victory over Andrean. He also had 1 assist and 3 rebounds.

Alvarez started shooting hoops when he was 13. The Phoenix Suns point guard, #3, Chris Paul was the professional athlete that motivated Alvarez to start playing basketball. He said he decided to stick with the game.  When asked why he stuck to the game was because, he said, ”To give me another shot at doing something major that I love to do”.

Besides playing at Bishop Noll, Alvarez played for AAU and it has prepared him for competition at the high school level. One of the biggest challenges that he has reconciled himself to playing at Noll was his height. Also, he says that the mind game that comes with basketball by having that mentality, that just do it and ask for more and more and keep going. He has overcome this by becoming tough, playing aggressive,  and developing self confidence in himself to work harder and achieve his goals.

His highest significant moment was when he dropped a buzzer beater game winner three. After that, his love for the game grew and led him to becoming greater.

After playing this sport for years now, Alvarez has learned crucial lessons that he can use and add to his life to become not only a considerable substantial athlete, but also a notable noteworthy person over all.

“I learned that communication is key because if you don’t, then you can’t play well together,” he said., “Basketball helped me grow as a person and affected me by giving me character.”

“This school has prepared me for and helped me accomplish my goals and I’ve had fun playing basketball this year, but now I have to work harder in the off season and get my skills down and make my name known”.