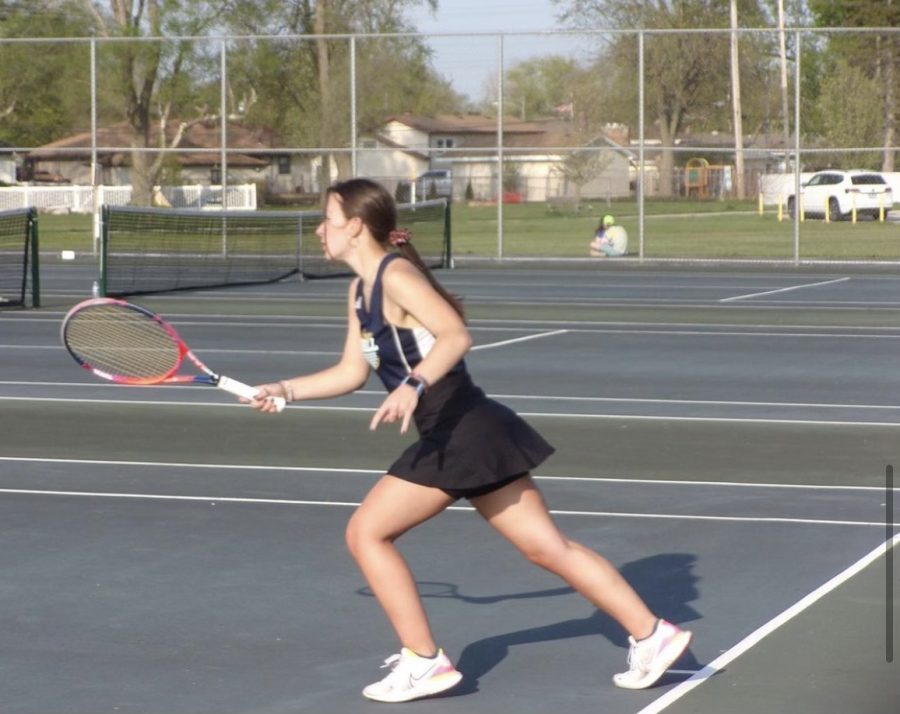 Finishing the regular season off strong, the Bishop Noll girls tennis team of 2021-2022 is preparing themselves for making memories together and playing strong in their postseason.

Senior Addison Cipowski has high hopes for this year’s sectional when they play Whiting High School on Thursday, May 19, 2022 at Whiting for sectionals. If the team wins, then they will be heading to play against Hammond Academy of Science and Technology. In the No. 1 singles spot, Cipowski has helped keep stability on the team during her four years as they navigated coaching staff changes, home court changes, and COVID protocols.

“I have been on the tennis team since I was a freshman because my friends and I wanted to try something new, so we all joined,” Cipowski said. “I started off as varsity three singles and worked my way up to one.”

With hard work and dedication, Cipowski kept practicing, and sooner or later took the role of being the number one spot on the team. She tends to go first no matter what school they go against.

“This helped me with my leadership skills by definitely forcing me to be extra positive and supportive of the other girls. Although it’s hard sometimes, I try to keep my temper to a minimum because I want to be a good role model for my teammates,” says Cipowski. “We all support each other and I love the sport so much.”

This year on the girls tennis team, they only have one freshman that was able to make the varsity team. She showed leadership qualities, hard work, and determination to prove that is where she belongs. Now, with a history of tennis within her family, freshman Sophia Nowacki made a decision to join the school’s team.

“Both of my sisters played tennis and it was sort of assumed that I would play too. I’m glad I made that decision, because I like my coaches and my teammates, everyone’s super supportive and encouraging,” Nowacki said.

As with any normal team, Nowacki mentions how the girls need to improve on their confidence, and how it would be much better if they believe in themselves when having fun with the sport.

There was a new coaching staff which included Zarahi Gomez, who is also the Spanish 1 teacher at Bishop Noll, and Adam Baez as the team’s head coach. They are here to rebuild the team by providing hands-on lessons, recruiting athletics girls, and are setting some future goals of success. The team’s record this year is 6-6 not including their tournaments.

“Tennis is as much a mental game as it is a physical sport, I think our team needs to improve their mentality to be more positive,” says Gomez. “I also think that with more conditioning and understanding of the sport, they will be motivated to step up their physical endurance for the sport.”

Both Cipowski and Nowacki agree that they would make this season count by always trying their hardest on the court, having fun with their teammates, and being excited to keep improving for their team to keep getting better and better.

“The team has improved substantially since we first started. At first, some girls had a hard time being able to hit the ball,” says Gomez. “Thankfully, we have gotten a lot better and I can see a huge improvement overall with our girls.”

Nowacki is grateful and appreciative of her upperclassmen, she sees them as role models.

“They have helped me a lot when it comes to playing the sport. When I was nervous for my first match, they reassured me that it was going to be alright even when I made a lot of mistakes,” she says, “I have a great relationship with each girl individually and I wouldn’t change that.”

Since the beginning of her love for tennis, Cipowski had to deal with new coaches coming or leaving, but overall that taught her different lessons.

“I’ve liked all of my coaches so far, they have been very supportive and always pushing me to be better,” said Cipowski.

There are lots of surprise standouts that the team have, but Gomez mentions a duo that is like no other.

With it being her last year at Bishop Noll, Cipowski hopes for nothing but the best for the team, but has a few thoughts the tennis program needs to do in order to secure a successful season in the upcoming years.

“Moving forward, I hope we can secure a home court. It is very stressful only practicing on three courts when every school we face has double or sometimes triple the amount,” says Cipowski. “Also, new skirts would be nice too!”

Nowacki and Cipowski have different strategies to finish off the season strong. Nowacki hopes to get 1st or 2nd team all conference by still going to practices and working hard to do her best in sectionals which determines what she gets. On the other hand, Cipowski’s goal for the end of the season is to appreciate all of her matches, and not take the season for granted, especially since it’s her last one.

“I would be happy and content if the girls left this season knowing more than what they came in with. I want the girls to finish strong and try their absolute best,” says Gomez. “My biggest goal personally was for the girls to learn to love the sport and leave this season eager to work harder over the summer and come back next season stronger, more confident, and more motivated.”