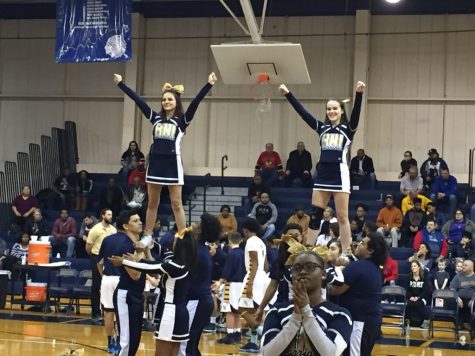 Bishop Noll is bringing back a new and improved dance team. There hasn’t been a dance team since 2017 and it’s pretty exciting to see what they have in store this year. It will be pretty interesting this year especially since covid, there will be a new twist to how dances will be coordinated and formatted. At that point, the once-great team with numerous State Championships had dwindling numbers and a lack of commitment. Dance team members would join and quit—then join again—and it seemed like the coaching staff would change year-to-year in the last few seasons the team existed. Next school year, however, the team will be reinstated, and there’s a lot more energy behind its resurrection.

There was a call out meeting last week; Thursday, March 5 and it was pretty successful according to Miss Dominak. A total of 15 girls showed up and they will be holding their first official practice this week; Tuesday, March 9. Dominiak said that she was approached with the idea of reigniting the team, even though she had never considered it before.“Mrs. Pastrick and a couple other students reached out to her multiple times this year about the dance team,”she said.

She said after a lot of hard thinking and consideration, she finally decided to go through with the idea. The 2012 BNI grad who teaches digital design was never on the school’s dance team; however, she has a strong background in the art.“My mom was a ballet teacher for over 30 years and owned her own studio for about 10 years,” she said. “She went from her own studio in Whiting to teaching at Dance Connection in Hammond for another 20 years”, Dominiak says.

Dance and art has always had a huge impact on her life. Even though she didn’t take classes growing up as a child, her mom always brought her with her so she could maybe follow along in her footsteps.

“When my mom passed away a couple years ago, I started taking alumni classes at Dance Connection as a way of coping and making me feel closer to her,”she said. “Because of my non-traditional background, I can bring a very unique style to the team,” Dominiak said. “I’ll be able to teach and choreograph dances for the team and also learn from students their type of dance style as well”.

She wants to cover a large variety of dance styles, from jazz to modern to musical theatre. “ I’m hoping to have about 1-2 showcases with a little bit of a mix. A mixture of both themes and choreography from students and myself to give the audience a time of their life”.