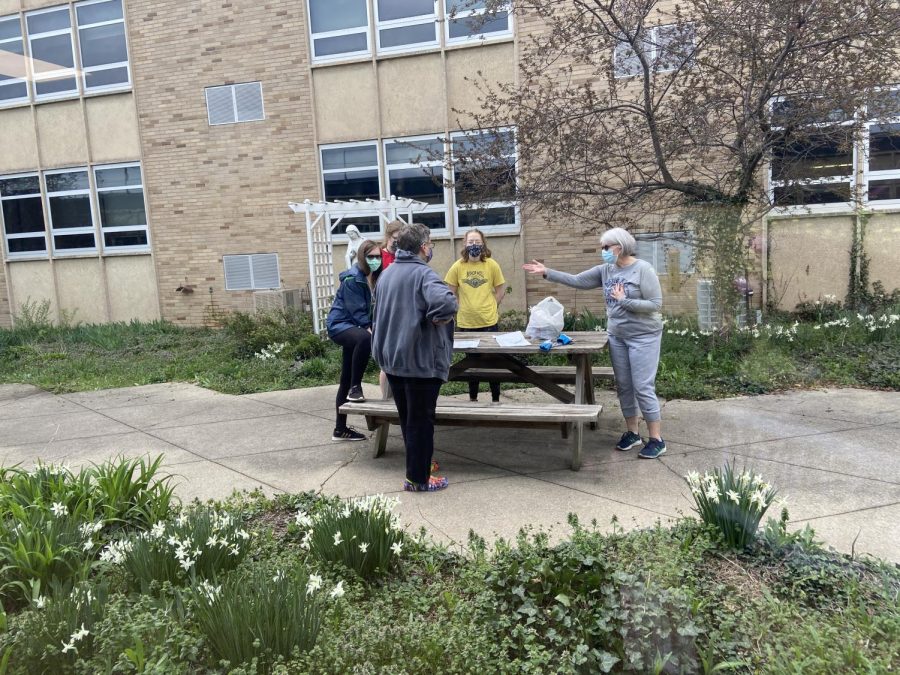 The environmental club meets in the courtyard to decide how to clean it up. The group decided to to clean the courtyard as one of their projects for the upcoming Earth Day.

After nearly a five-year absence, the environmental club is once again promoting a greener lifestyle. Junior Abigail Wojtaszek founded the club, which mandates recycling in the school building and stresses the importance of protecting the environment to fellow students. “I’ve always cared about the earth and I’m more than excited to help others at BNI do their part,” Wojtaszek said.

She says that founding this club was also a part of her challenge this school year for the “Rise Global Scholarship”. With COVID going on, many students have set goals for themselves so that they can stay on track of their work. Abigail is succeeding and reaching high peaks–so high that she was able to start her own club while still focusing on school. She didn’t do this alone, though; she had the help of science teachers Ms. Rosalie Schmidt and Mrs. Mary Koster.

Wojtaszek reached out to the two of them because she believed they would make a great team. By Ms. Schmidt being a BNI alum, Abigail figured she cares just as much as her about the BNI environment. “Abigail did a very good job recruiting people, we have a good turn out,” Schmidt said. Schmidt previously sponsored the environmental club from 2013-2016, which was the Indiana Envirothon, a competitive event that tested students’ knowledge of environmental resources including aquatics, soils, forestry, wildlife and other current environmental issues.

“I’m more than excited that Abigail reached out to me to be a part of this club because I’ve been so tired of seeing bottles in the landfill that should be recycled,” Schmidt said.Wojtaszek says that as president of the club, she hosts all the meetings, leads the recycling efforts and will soon help direct the science department seek speakers  for Earth Day and DNA Day. “I haven’t brought in a virtual aspect, but when it gets closer to science week, I will,” she said.

Wojtaszek is also so excited about having recycling back. Her next goal is to clean up the courtyard and make it look pretty for the spring.Schmidt said that they hope to accomplish new goals this year. They want to recycle every plastic bottle and aluminum they can possibly find. “It takes 95% more energy to make a new aluminum can than it does to recycle one,” Schmdit said.