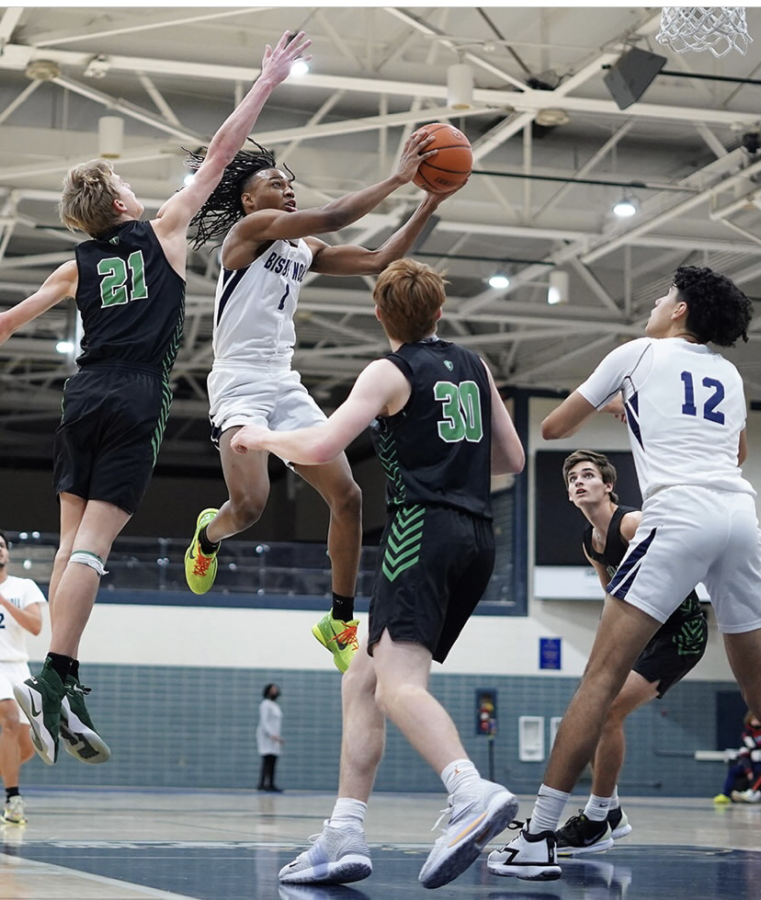 Airborne. Artis shoots for one of his two three-pointers in a Jan. 22 win against Whiting at Noll. “This rivalry game was long awaited and I think the liveliness we got from the student section really encouraged us to play harder this game”, said Artis.

With only four seconds left on the clock, Ahmad Artis goes in to make the basket. Suddenly, the crowd gasps. The then-junior point guard is laying on the ground holding his wrist. Finally, he walks to the bench to a sudden round of applause.

Artis’s junior season went down the drain due to his wrist fracture. After sitting out most of the year he came back weak and struggling to finish the season. Now, it’s senior year and his off-season work is finally paying off.

“After injuring my arm everyone expected me to be back to myself after a few months but I had to spend the rest of the season and offseason prepping for my senior year. It was disappointing because junior year is an important year for scouts but senior year I came back like a dog”, said Artis.

Artis began playing basketball around the age of 6 and his father would have him in the gym, playing until he cried. There were plenty of moments where he wanted to quit because his dad didn’t go easy on him, but looking back, he realized that’s what shaped him into the great player he is today.

He played for many AAU teams over every summer and for Highland Christian in middle school. For all teams he played on, he never heated the bench. Playing with many different teams he noticed he wasn’t the best on the court but instead of competing with his teammates, he realized he was his competition and he was the one to beat every game and practice.

“Basketball has played a big role in my life because I come from a basketball family, everyone played,” Artis said. “My earliest memories were watching my sister play in high school, she was cold to say the least. I recall a specific game she played her junior year and the ball was in her hands the last few seconds of the game and the pressure was on her to shoot the winning three. Of course she made the shot and her face afterwards was tears of joy. My sister and her team coming together through all the plays and just the fun of competition spiked my interest.”

High school was a different game, though, but he made the varsity team his freshman year. Sophomore year was one to remember he spent a lot of time in the weight room with the coach during that time. That year, he played through his first injury. Lifting the same weights as the varsity seniors put a lot of pressure on a scrawny, 140lb-sophomore.

“The coach at the time put me through so much pain with lifting and there was a lot of pressure on me being a sophomore on varsity,” he said. “The guys I played with had more skill and were bigger so I had to step up and play through my back pain to keep my spot on the team”.

Now his senior year and he’s in the best shape he’s been in since freshman year. Although his injuries set him back both sophomore and junior year, he overcame them and pushed harder. Not only did he re-up physically but he grew a better mindset for his passion. As captain, he works his teammates harder each time and encourages them so they won’t make the same mistake as he did.

The resilient point guard is averaging 17.4 points, 4.4 rebounds, and 2.5 assists per game. Although the Warriors lost against Lake Station on December 14, Ahmad led his team with 33 points, 6 assists, and 8 rebounds.

Artis has plans to further his career in basketball, he’s going to continue to work hard and train until he can begin his professional career.

“My biggest setback of most of my high school career would be playing through my injuries. Not only did I make them worse but I extended my recovery time. My advice to aspiring players and even my teammates is to listen to your body and if you have an injury, the longer you choose to play with it still injured the longer it’ll be until you can come back one-hundred percent”, said Artis.