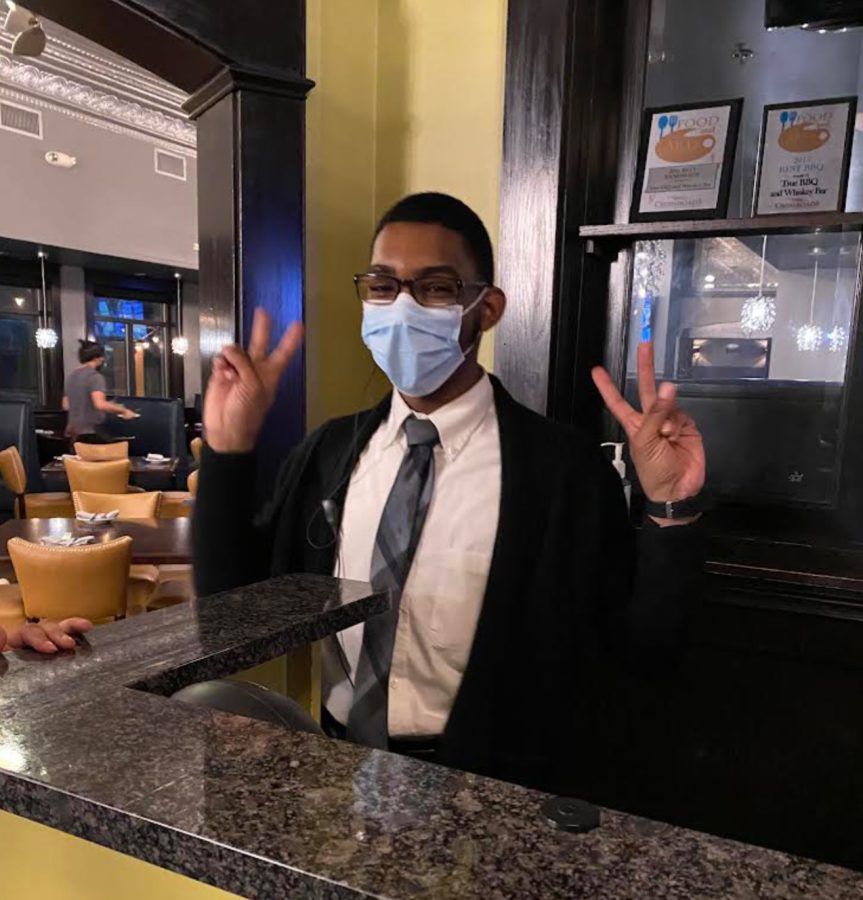 First day in the job. Senior Eric Copeland poses for a photo to commemorate his first day as a manager at True BBQ in Munster. Copeland was offered the job in 2021 and took it with great thanks.

It was like any other day for senior Eric Copeland. He went from school to work as the host at True BBQ in Munster, when suddenly, it all changed.

Copeland started off as a busser and quickly got promoted to a host. Shortly after dipping his toes in hosting, he was offered the position of manager. It was a truly shocking surprise to him since he’d only had six months of experience. Copeland’s boss didn’t even need to interview him to know that how serious he took the job made him such a great leader. Copeland, however, was extremely hesitant about accepting the position. He had created a good bond with his fellow employees and didn’t want to stray from being a friend to being their boss. In the end, he took the job with pleasure because not everyone can be as lucky with an opportunity to learn and grow in such an environment.

“My boss told me this was a huge opportunity to take a step into the door of my future, and will help build and create skills that’ll I’ll need anywhere I go in life,” Copeland said.

With taking on this new position, he’s responsible for all the front of house employees, keeping his staff on task, tracking inventory, and the restaurant industry’s least favorite, customer complaints. Ever since the start of Copeland’s career in the restaurant industry, he’s realized the struggle and hurtfulness servers endure from disrespectful, rude customers. You’d think that the leap between being a host to a manager would be hard to cross  as maintaining a restaurant can be tricky with its many ups and downs. One mishap and so many people can be affected in so many different ways. With the change of scenery and expectations, Copeland surprisingly found a balance when communicating with customers and staff saying,

“I now have the perspective of a server, manager, host, and customer, and it’s very interesting how I was able to connect the dots, and that’s how I learned to talk to customers,” he said.

During the school year, Copeland aims for 30 hours a week, and during the summer, it’s around 40-45. It’s for the best that he’s more accessible in the summer since business usually starts to pick up when the weather is nicer. But during the school season, it became more challenging when the weekends showed to be the busiest aka, the only days when school isn’t happening. Along with the weekends, Copeland works Tuesdays, Wednesdays and every other Sunday.

A perk of being a manager is that he can be flexible with balancing his own personal schedule with work.

“Managing a restaurant can get rough here and there, but everyone knows I’m quite young and still sort of new to everything, so I do get a bit of leeway,” he said.

In such a high demanding job like this, Copeland has learned a full range of skills from firsthand experience. A big learning curve was communication. He’s had to find a way to look at things from other people’s perspective in order to show them that you are there to help in any way possible. Multitasking is also a key skill in any industry. Picking up the art of working quickly and efficiently, making snap decisions, and working effectively in such a quick-witted environment is super important. All these skills will play a huge role in Copeland’s future. He plans on venturing in politics and business, so being able to build communication skills is really valuable to him. The business aspect of his job also helps him better understand the priorities and needs of a business.

“I’ve had to master learning how to communicate with others when they are level 1,000 and how important it is to keep yourself in check and remain at a level 3 to deescalate a situation,” Copeland said.

Copeland’s biggest supporter through it all has been his grandmother, Annetta Copeland, who reminded him how big of an opportunity it was and how it’ll help in his journey in any careers he plans to embark on. If anyone were to be handed an opportunity similar to his, he’d want them to take it, as long as they are mentally prepared for all the demands a job like this come with especially because,

“Not everyone just gets those types of opportunities just handed to them, and it’s a blessing from God you could never leave on the table,” he said.