Icing on the cake

Sophomore Orozco leads on the ice, in the classroom 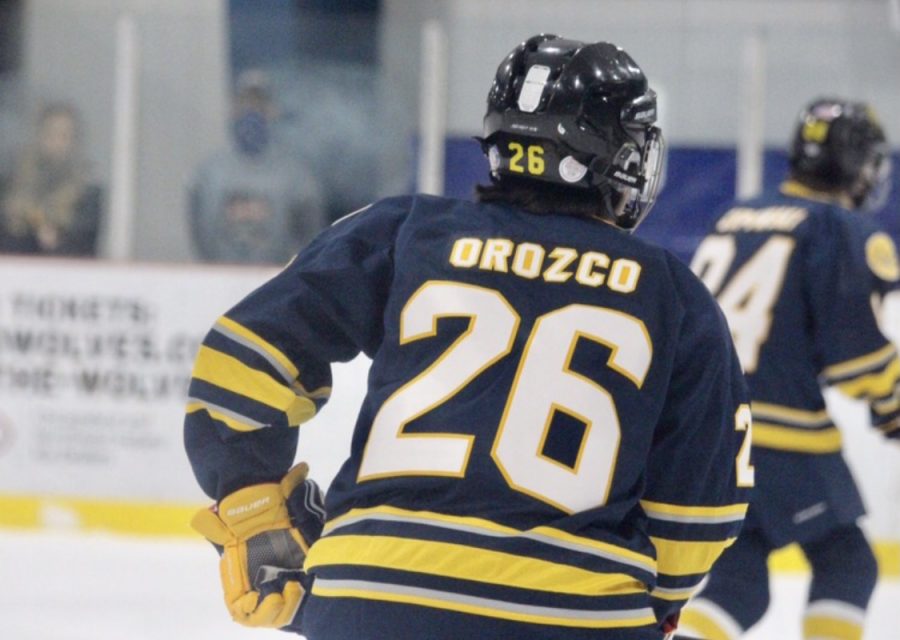 It’s the beginning of the hockey season and sophomore Julian Orozco is getting mentally and physically prepared to start off a game on the ice. At the Kube Sports Complex in Hammond, Orozco heads to the boys locker room and sees his team getting ready for the start of the game.

“Making sure to retape my stick before every game, because honestly I prefer it that way. It really makes me feel like that I’m 100% ready for the game and that there are no holes in my tape,” says Orozco. “I also like to take my gloves and put them in the hand dyer so that they aren’t wet. I hate playing with wet gloves. I like them to be dry and warm.”

Orozco had many options for choosing his high school education, but chose Bishop Noll Institute not only because of the environment but also due to the fact of their hockey team. Coming from the Lake Central public school system, Bishop Noll wasn’t even on his radar until he actually had to think about where he wanted to spend the next four years of his life.

“I was supposed to go to Lake Central High School and it’s a really big school which wasn’t my preference. Before what would’ve been my first day there, I had only been in the school about three or four times,” says Orozco. “I also wanted to go to a Catholic school but was never given the opportunity for it, so when I noticed Bishop Noll it was perfect for me. It was in the area and I had a lot of friends that were already planning on attending there. Also, I already knew we were going to have a strong hockey team.”

Coming from Kahler Middle School in Dyer and being a part of their community for four years, he wanted to spice things up with a new environment.

“I was at the state championship game the day Noll won for hockey and I was really impressed with the coaching and their decision making. I wouldn’t say their winning was the only reason why I came to Noll, but it was definitely a big factor,” says Orozco.

It took him a while to figure out what school to attend because he knew he wanted to go for not only his education but to make friendships and outstanding memories as well, so after plenty of research, Orozco knew where he wanted to go.

“When my older brother was looking for schools to go to when he was going into high school, Bishop Noll was one of the places he toured. I was also there for the tour and I thought it was a pretty decent school, I kind of kept it in my mind for when I was going into high school,” says Orozco. “I also had friends that were playing for their hockey team already and I knew that if I wanted to play for that team, I would have to go to the school. So, I took a tour of the school and ended up really liking it.”

Orozco mentions how this upcoming spring will be thirteen years of playing hockey.

“What made me interested in playing was that my dad has always been a big Blackhawks fan. At about the time I started really liking hockey, the Blackhawks team started to get really good,” says Orozco. “First, my brother started playing hockey, so then I decided I wanted to play as well.”

When entering into a new school, it can be nerve racking trying to make new friends, but joining a sport can help. Orozco mentions how one of his closest friends is sophomore Kyle Cipowski, and they have been making memories together since the start of freshman year due to meeting each other at hockey practice since being on the same team.

“What has made us close is that only for the fact of the long season of hockey and being in the same friend group,” says Cipowski. “Another thing that kept us together was that in hockey Julian and I play the same position, often we were sometimes each other’s defense partners.”

His teammates are what made Orozco keep going at what he is doing.

“Our relationship has grown pretty significantly because of hockey and even school. During the season, we practice 5 days a week and that really made us bond together,” said Cipowski.

Strong on leadership, intelligent, confident, and trustworthy are some of the adjectives Cipowski would use to describe Orozco as a teammate.

“At first I was a little bit nervous when joining the hockey team, especially with Lake Central having a great team as well, so I knew it would be hard to match what they were doing,” says Orozco. “I knew we were going to be a good team but I didn’t think we would be as good as we were this past season.”

It’s not that easy to be a part of the team, therefore for the most part they practice even when the season is over with.

“Managing my time can be somewhat difficult but I usually stick to whatever sport has priority during that time of the year. During the school year, hockey takes priority over me playing baseball so I do miss a lot of baseball practices during the winter but hockey does keep me in shape so that when baseball comes around, it isn’t as hard of a transition as it may seem,” says Orozco. “During baseball season, I stop going to hockey practices and stay focused on baseball. I will attend hockey practices from time to time.”

Cipowski mentions how Orozco plays ma big role on the hockey team, because next year he will be the only upperclassmen on defense with a background of playing with the varsity team. Another impact that Orozco made was that he scored the game winning goal against Carmel High School to beat them 1-0.

“I just like to have fun so that keeps me motivated to play. Being in tight games especially against teams in the area like Crown Point, Munster, and Lake Central are really fun, mainly because I’m playing against all my old teammates,” said Orozco.

Being full of surprises, Orozco also played for the varsity baseball team at Noll, but intentionally he has been playing the sport for twelve years this upcoming spring.

“I was kind of surprised that I made varsity this year, especially because I didn’t do the best on JV last season. It still felt good because I know I made a lot of improvements,” said Orozco.

Being one the three sophomores that made the varsity team, he mentions how he understands that he needs to work hard for playing time.

“I worked hard during the summer last year and I think I made some big improvements,” said Orozco.

With sports taking up most of your time, it can be somewhat more difficult to manage your time with socializing, keeping up with your grades, and practice.

“Due to hockey and baseball I don’t have much time to socialize with people, especially in person, but I try. For school, I usually try to do my homework when I get it assigned and when I have free time, so that I don’t have to do so much after practice,” said Orozco.

To his fellow classmates that are on the JV baseball team, Orozco is a role model to indicate on not giving up even when times get rough.

“It keeps me busy and the people that I meet is what keeps me going in participation with hockey and baseball,” says Orozco. “A lot of people I know now are because I met them through my sports, so I think I will keep doing what I am doing.”

In order to stay in check with his mental health, Orozco expresses his emotions through the game he is playing.

“During baseball season I usually get mad more easily so I think hockey helps with getting anger out, but baseball also helps with calming me down, so both have their benefits,” said Orozco.

Having a good time when being with his other friends or teammates, his humorous jokes, and always looking out for others are some of the things Cipowski admires about Orozco.

“My parents encourage me to keep playing. They have had to drive me to every single practice and game for the past 13 years so that’s something that keeps me going,” says Orozco. “I know that hockey and baseball aren’t cheap so I appreciate them giving me a choice on what I want to play.”

Having a close relationship with Cipowski, Orozco normally takes his wise words into consideration.

“I try to encourage Julian by telling him what his parents would want for him, which would be to try your best,” says Cipowski.

Other than being a lover of sports, Orozco has other interests and hobbies.

“There are multiple things others don’t know about me. For instance, I like hanging out with my friends whenever I get the time, which is rare. If I’m not doing that then I’m mostly at home watching TV, playing video games, drawing, or sitting with my dog.”