Anaiz Espinoza salutatorian for class of ‘22 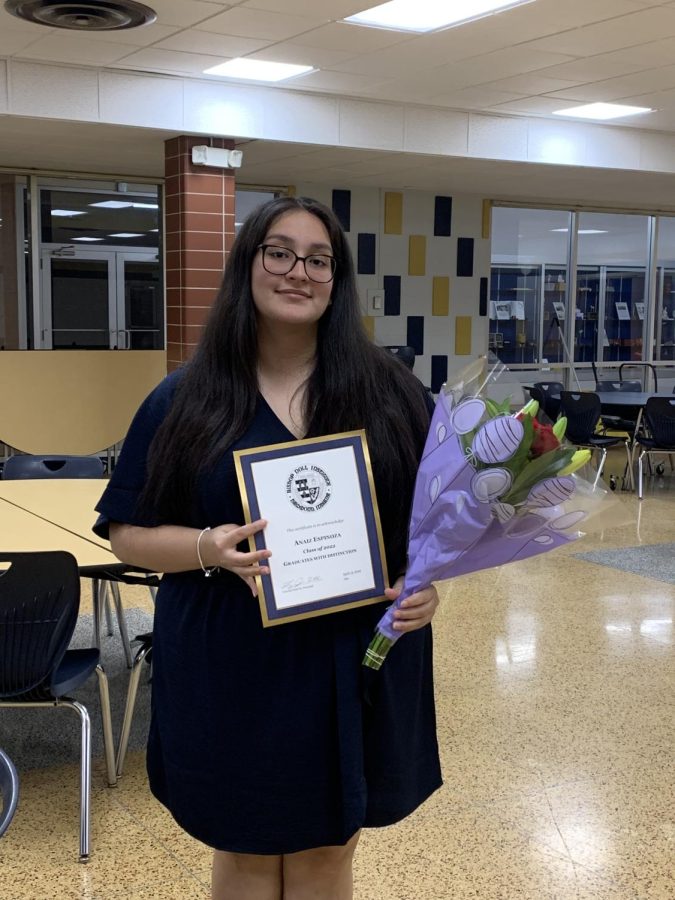 The salutatorian of Bishop Noll’s senior class of 2022 is Anaiz Espinoza. Espinoza’s hard work and determination in school throughout her four years earned her a GPA of 4.42. She will be attending University of Illinois at Urbana Champaign and majoring in biology on a pre-med track aiming to become a pediatrician.

“Some of the things that I had to do to push myself through to become the senior class salutatorian was trying to keep up the good grades,” said Espinoza.

“I would say my biggest accomplishment would be becoming salutatorian because this proves to me that all my hard work paid off,” said Espinoza.

“I went to St. Casimir. I was drawn to BNI because that was the place mostly everyone went to,” said Espinoza.

Espinoza’s motivation to succeed in school came from her parents .

“I stayed motivated to be successful at school because of my parents,” said Espinoza, “The main thing I wanted was for them to be proud.”

“My parents encouraged me to do well in school because since I was young they always told me that school comes first before anything else,” said Espinoza.

Throughout her four years of high school Espinoza has challenged herself in her education at Bishop Noll Institute.

“I would describe my four years at BNI as challenging but rewarding,” said Espinoza, “I took a few hard classes, but because of that I got really close to some of my closest friends.”

Along with taking challenging classes Espinoza was a part of NHS, the Spanish National Honor Society, Student Ambassador, Environmental Club, soccer, and the Drama Club during her years at Noll.

“There was an absolute aura of humility, and of awe sort of emanating from her that never made me question her intentions as mere attempts to achieve academic success,” said Johan.

Bishop Noll has helped shape her into the exceptional student she is today.

“Bishop Noll has shaped my journey because it has taught me the basics and fundamentals of succeeding,” said Espinoza.

Something Espinoza wants to leave with all of the underclassmen is this piece of advice.

“Some advice I would give to underclassmen is to enjoy all the time you have with those around you,” said Espinoza, “By the time you graduate you are not going to remember the time you got a bad grade on a test, but instead the fun times you had with your friends.”