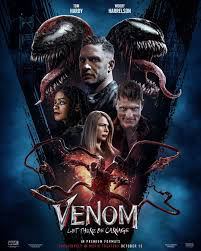 Both funny and interesting, Venom 2: Let There Be Carnage is a great movie to watch if you want some action and just a little bit of gore. Venom 2 is the second part of Marvel’s original movie Venom. The movie is about an alien that takes over a human’s body, Eddie Brock, played by Tom Hardy. Venom was also played by Tom Hardy. The two he two try to coexist with each other which leads to arguments and fights. The movie displays funny arguments and an interesting life story.
There are also people like Anne Weying, his ex fiancé, played by Michelle Williams. Shriek and Cletus Kasasy, the evil couple who plan to take over the world, played by Naomie Harris and Woody Harrelson.
In the movie Eddie is having a lot of issues in his life. He lost his fiancée and now she has moved on, his house is a mess, and his job is struggling. While all this is happening he blames his parasite, Venom. Venom tries to do what he thinks is right and tries to help, but ends up making things worse. While Venom is trying to help Eddie, he accidentally creates a spawn. Due to all the arguing and fighting Venom and Eddie split up. While they are apart Eddie realizes that he needs Venom. When they make up they have to come together and destroy the monster that was accidentally created.
Venom 2 came out October 1st of this year. I was very excited for this movie, especially since I really liked the first one. I liked that it was fun and exciting. It was very comical and funny. The story progresses and I feel it gets better and better each time. The story is packed with action, it has some violence and gore that will surely have you holding your breath.
The timeline of the story is kind of chaotic but it is still interesting. It is kind of hard to keep up with everything, but you have to really pay attention to put everything together. I like the chaotic nature of the story because it makes you more invested and want to keep watching.
My favorite part was probably the part where the original Venom and the bad Venom, Carnage, started to fight. It was the most interesting part, it had every phone in the movie theater on the edge of their seats. I was kind of scared because for a minute it looked like the Carnage would win. But thankfully he didn’t.
The ending of the movie was the part I didn’t like. I was left off on a cliffhanger. It makes me very eager to want to know more, which I know is the point. It kind of confused me a little too. I think there could have been a happier ending. The ending wasn’t too sad but it wasn’t how I would have imagined it.
Venom 2: Let There Be Carnage is a good movie. I’m not sure if the movie is on any streaming platforms yet, but you could, it would probably be on Netflix, HBO Max, Hulu, Disney Plus, or

even Amazon Prime. You could also go to the movie theaters to see it. No matter what you watch it on, I would say it is worth watching and it won’t disappoint.